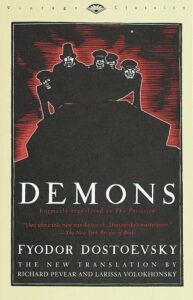 Demons can manifest themselves in the form of ideas. Ideas can be gripping, tempting, and even utopia in nature--which is why there’s no surprises when people latch themselves and even sacrifice their lives for the sake of a collective vision or ideology. In Demons by Dostoyevsky, he outlines how the dark side of ideas can infiltrate the individual, eventually infecting a whole nation. In 19th century Russia, several demons took over his nation in the form of Western ideals of utilitarianism and atheism. Dostoevsky compared the downfall of his nation to the New Testament where Jesus sends demons into pigs and the pigs end up killing themselves. That’s essentially what happened to his people in Russia--demons entered normal civilians as well as state officials and they ended up killing themselves in misshapen ways.

The New Testament shows us a different way to think through and filter ideologies. It does not seem to be linked with a particular ideology and it seems to converge at a principle of sacrificial love. Loving first and foremost gets at the core message of the Bible and when you find yourselves in disputes, it also teaches us to be humble, to listen, and be patient in conversations.